Police and government in the province are analyzing online habits and expanding the types of behavior they can respond to, documents show.

Update: On October 8, a spokesperson for Shift BC requested changes be made to this story. They said that people are not be contacted for making hateful comments online, only for “violent threats”. They further said that Shift does not store data in the Risk Tracking Database; that all referrals to Shift require informed consent from the individual; and that a portion of Shift BC’s budget goes toward anti-racism education.

An anti-radicalization program in British Columbia, Canada that intervenes with people believed to be “on the path” to radical violence expects the number of cases it handles to soar as the pandemic drags on.

Civil liberties experts warn the program may infringe on Constitutionally-protected activities, while extremism researchers say the intervention-based approach could backfire.

Shift BC, an initiative of the Ministry of Public Safety, relies on police, public security agencies and nonprofits to monitor people’s behavior both on- and offline to identify who may be heading toward violence. When someone is flagged as being potentially radicalized—say, for making hateful comments online—authorities reach out to the person to suggest they join Shift. If the person accepts, Shift responds with counselling and other support. Shift has been allocated $2 million in provincial funding thus far.

Documents obtained through a Freedom of Information request show authorities expect the number of Shift referrals to rapidly increase as the pandemic continues.

“[Shift BC] is operational (i.e. Accepting participants from Law Enforcement, Government Agencies, and trained community non-profit partners) and has a number of active participants and volume is expected to increase exponentially,” a document from the Ministry of Public Safety dated January 25, 2020, reads.

Mental health issues exacerbated by the pandemic are cited as a major factor driving radicalization to violence. A spokesperson for the Ministry has said that Shift BC deals mainly with individuals showing interest in far-right extremism. So far in 2021, nine people have signed up for Shift.

In response to a sharp increase in hate crimes in British Columbia during the pandemic, police and government are leveraging Shift BC as a tool to intervene with people acting out non-criminal “hate incidences” in the province.

The BC Anti-Hate and Anti-Racism Working Group, described as a cross-government collaboration, “represents a commitment to […] a broadening of scope to encapsulate a response to hate incidences in the province beyond the narrow definition of ‘Hate Crime’ and the purview of law enforcement”, documents show.

The government of B.C. defines hate incidents as “a broader range of behaviour that may or may not meet the definition of “hate crime”.

Evan Balgord, Executive Director of the Canadian Anti-Hate Network (CAHN), said that while Shift BC could be a useful tool for addressing radicalization, the impact of the program needs to be balanced against its cost and the potential for civil liberties violations.

“When police and government are monitoring people for signs of radicalization, it’s different than when [CAHN] does it, because we don’t have the ability to arrest people,” Balgord said in a phone call.

“It’s nice to get people out of hate groups, but for people involved in right-wing extremism, fear of government surveillance and persecution is often part of why they’re radicalized,” said Balgord. He noted that by monitoring the individuals they’re trying to reach, authorities could push them further into radicalization.

“Nine people have signed up [to Shift], but has the program made anyone worse? We just don’t know.” 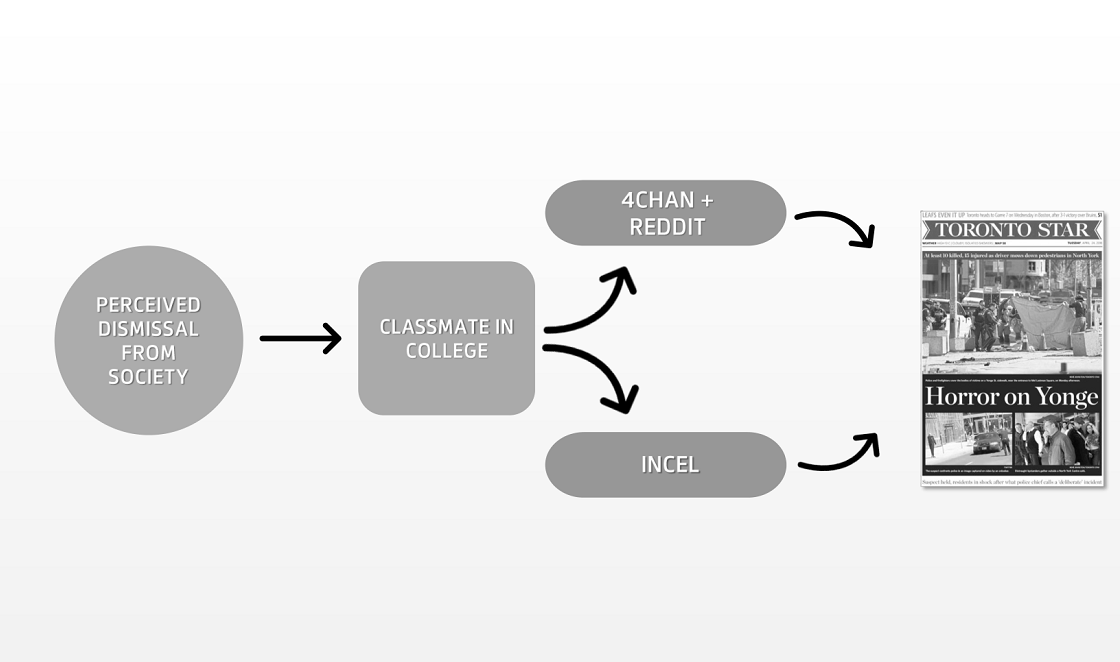 Slide from Shift BC presentation illustrating the process of radicalization of self-described “incel” Alek Minassian, who was convicted of murdering 10 people in Toronto in 2018.

How does Shift BC work?

Shift is an offshoot of the Hub model of policing, also known as Situation Tables, which partners police with doctors, school and social service providers to intervene with people believed to be “at risk” of becoming a criminal or victim of crime.

The Hub model uses dozens of factors to determine who could be at risk—such as if a person is employed, uses drugs, or displays “negative behavior” like partying or urinating in public—and is currently used in more than 100 Canadian cities and more than a dozen cities in the U.S. Under the Hub model, information about people analyzed for intervention is stored in a Risk-tracking database.

Some ethicists have suggested that Hubs could be violating individuals’ Charter rights by sharing their personal information and launching interventions without consent. Shift BC receives referrals from Hubs in British Columbia.

In program documents, Shift BC administrators acknowledge that radical thoughts and ideas are protected by the Canadian Constitution.

“It is important to recognize that radicalization, or having radical thoughts, is not illegal or necessarily problematic in and of itself,” reads the Shift BC website. “The Canadian Constitution, through the Charter of Rights and Freedoms, protects Canadians’ freedom of thought, belief, opinion and expression.”

“Radicalization to violence occurs when a person or group takes on extreme ideas and begins to think they should use violence to support or advance them, either in Canada or abroad.”

Abby Deshman, Director of the Criminal Justice Program at the Canadian Civil Liberties Association (CCLA), has voiced concerns that Shift BC could infringe on people’s Charter rights.

“We know that police services have monitored grassroots movements because they were expressing dissenting viewpoints or engaging in peaceful protests,” Deshman told VICE World News in May. “Sometimes, police have assigned these groups labels such as ‘radicals’ or ‘terrorists’ for engaging in constitutionally-protected activity.”

A spokesperson for the Ministry has said that activism is not “suitable criteria for inclusion” in Shift BC.

Balgord said that effectively combating radicalization requires a “holistic” approach that should begin in the classroom, since young people are increasingly being targeted for recruitment by extremist movements. He points out that the millions in funding for Shift BC could have paid for anti-radicalization education in schools across Canada.

“We’ve talked people out of hate movements,” Balgord said. “But people have to be ready to get out.”